Big weekend ahead- and beyond- so let’s get to it…

SURF:
I’m going to cut to the chase. Not much surf this past week but great weather AND the water temps finally stayed about 70 degrees! For this weekend we’ve got fun SW swell filling in tomorrow along with smaller NW windswell. Friday will start off slow with the low tide but by sunset we should have chest high surf. That continues all weekend. The OC will have a couple shoulder high sets from the SW and water temps are hovering around 73 degrees (beware the NW windswell over the weekend though- it may drop our water temps). Along with good weather the next few days, should be a fun Labor Day weekend.

And here’s more numbers to crunch:

And here’s the sunrise and sunset. (We officially have less than 11 hours of daylight now. Winter is coming in quick kids!):

After a long fun weekend, the SW backs off and we get an early season small NW mid-week for waist high+ waves in north county SD and chest high in SD. After that, we get another fun chest high swell with shoulder high sets next Saturday/Sunday. And on the heels of the storm that created this swell is a stronger pulse, that if the models hold up, should send us head high+ SW swell around the 10th with the odd overhead set (and bigger in the OC). This should be one of the better swells this summer. Jinx! If anything changes between now and then though, make sure to check out http://twitter.com/NorthCountySurf.

Shaping up to be a nice Labor Day weekend around here. We’ve got a nice late summer day on tap on Friday after the morning low clouds burn off and we finally get a surge of monsoon moisture this weekend. Look for big puffy cumulus clouds to build over the mountains/deserts Saturday through Monday with the odd cloud drifting towards the beaches. Humidities and temps will rise slightly at the beaches too. Good time for a bbq. Things should return to normal the 2nd half of next week with more low clouds/fog in the nights/mornings.

A bounty of riches- Saturday with fun SW/NW swells. Or next weekend with better SW swells. OR… the 10th of September with overhead SW swell?…

Since it’s been boring weather-wise around here this summer, I thought it was time to break out “This Day In Weather History!” (Just trying to help you kill 15 minutes at work on a Friday):
2013: Thunderstorms struck Riverside and the San Bernardino Mountains where over one inch of rain fell in 20 minutes. Riverside was inundated with flooding of streets up to two feet deep. Riverside City College canceled classes. Flash floods occurred around the Perris area and along Highway 18 in the San Bernardino Mountains. Severe thunderstorm winds estimated at 70 mph hit Riverside and toppled trees there.
2000: Thunderstorms hit the desert with 1.5 inches of rain in only 45 minutes and wind gusts to 61 mph at Borrego Springs. Flash flooding resulted, with mud in homes and damaged roads in the Borrego Springs area. Flash floods, mud and debris covered roads from Yucca Valley to Palm Springs and Oasis.
1998: Strong thunderstorms developed each day starting on this day and ending on 8/31. 1.5 inches of rain fell at Apple Valley, 0.77 inch fell in only 45 minutes at Wrightwood, and 0.68 inch fell in only 30 minutes at Forest Falls. Homes and roads were flooded with four to six feet of water in Hesperia and Apple Valley. Rock slides occurred in Mill Creek. Roads were flooded in Sugarloaf and Forest Falls. Flash flooding was also recorded in Hemet. Severe thunderstorm wind gusts of 86 mph hit Sage (south of Hemet). Gusts of 50 mph were recorded at Rialto and gusts of 45 mph hit San Marcos. Trees and power lines were downed. Record heat occurred near the coast as well on these same days. Temperatures hit 114° in Dulzura, 112° in Yorba Linda and the Wild Animal Park, 110° in El Cajon, Hemet and Riverside, 108° in Ramona, 106° in Vista and Escondido, and over 100° in most of Orange County.
1993: A severe thunderstorm in the Imperial Valley produced an F1 tornado near Calipatria. Power lines were downed and the roof was partially torn from a school building.
1974: It was 92° in Big Bear Lake, the highest temperature on record for August. This also occurred on 8/8/1981 and on 8/25/1985.
1972: Hurricane Hyacinth moved as far west as 125 West Longitude before recurving to the northeast. The remnants made landfall between Los Angeles and San Diego on the 9/3 with winds of 25 mph and rainfall of up to one inch in the mountains from this day to 9/6. This tropical cyclone holds the distinction of traveling the farthest west before recurving and making landfall in Southern California. This occurred during the El Niño of 1972-73. Only 0.44 inch was measured in San Diego.
1951: A tropical storm moving north northwestward just off the west coast of Baja California moved northeastward into northern Baja California and dissipated. Moisture from this tropical cyclone resulted in rainfall of two to five inches in the mountains and deserts starting on 8/27 and ending on this day. Many roads were washed out in the Imperial Valley, but otherwise no major damage occurred. This occurred during the El Niño of 1951-52.
1942: It was 36° in Palomar Mountain, the lowest temperature on record for August.
1895: The low temperature was 54° in San Diego, the lowest temperature on record for August.
PIC OF THE WEEK:
The right in the foreground not that enticing? Just keep walking up the beach. I’m sure you’ll find something to your liking.Keep Surfing, 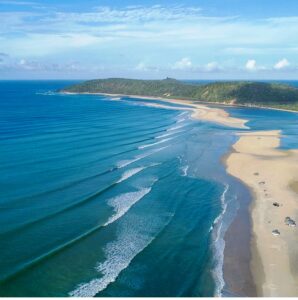